Today, we are happy to announce that Opera for Android has reached version 50. In this version, the Opera for Android team has made significant improvements to the native ad blocker. The team has also included a picture-in-picture feature and a fast scroll handle for easier navigation on the web along with three new available languages.

In Opera for Android 50, our native ad blocker has become more powerful than ever as we have included a new site-specific setting. This feature was implemented in our Opera browser for computers back in 2016 and now we are bringing it to our mobile browser.

The site-specific ad blocker option is a friendly solution for publishers to display their ads. It’s also an easy solution for users as they can switch the ad blocker on or off in two taps on the websites that they value the most.

This option can be enabled from the search bar in your browser. Users can tap on the green lock located at the left side of the website address which will display a window with site settings. Users can then choose to exclude a website from ad blocking.

The team has done a lot of work under the hood to improve the cookie dialog blocking feature, which is receiving greater site coverage.

Picture in Picture and faster navigation

Other noteworthy features include a simpler way to open PDF files and other documents, support for dark CSS themes, picture-in-picture support for videos (Android 8 and above), and a nifty new fast scroller for quicker page navigation.

The scroll handle also acts as the quick jump tool used in previous versions of Opera. Tap the handle when the arrow points up or down to go to the very beginning or end of a web page.

To our friends in the Baltic states, we are happy to inform you that Opera has been translated into your respective languages. Estonian, Latvian and Lithuanian languages are now available in Opera 50. Nautima! Izbaudi! Mėgautis! 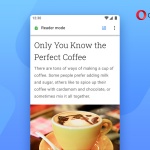 Easy reading in Opera for Android 56 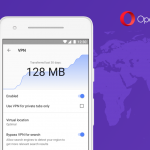