Almost two years ago, we released the first versions of the Opera browsers with native ad blockers. We made the decision to integrate an opt-in ad blocker into our browsers as we observed a surge in installations of extension-based ad blockers. When we asked people why they used ad blockers, the answer was clear: they wanted to stop being annoyed and for web pages to load faster. They were, however, experiencing the opposite as websites continued to grow in size and load more slowly than ever. The reason for this were bad ads.

The advertising industry also took notice of the growth of ad blockers due to bad ads, and the Interactive Advertising Bureau (IAB) admitted in 2015 that the industry “messed up” . As a result, the Coalition for Better Ads introduced its Better Ads Standards (BAS) initiative. According to the coalition, 12 types of particularly annoying web experiences, including pop-up ads or large, sticky ads, should be avoided.

As Google Chrome introduces its own ad blocker, which is switched on by default and blocks ads according to the Better Ads Standards, it’s time for us to have a look at whether the move will impact the demand for ad blockers.

Opera vs. Chrome – how do the ad blockers compare?

Opera and Google have taken different approaches to ad blocking. Google has decided to switch their ad blocker on by default, meaning all Chrome users will get it whether they intentionally want to block ads or not. Chrome, however, only blocks ads on sites which have been blacklisted by Google for not following the Better Ads Standards.

At Opera, we have decided to make ad blocking an optional feature which can be switched on in the browser settings. Once enabled, Opera’s native ad blocker works on all sites but it can be switched off for individual websites, allowing users to make their choice as to whether the ads presented there are worth their time. 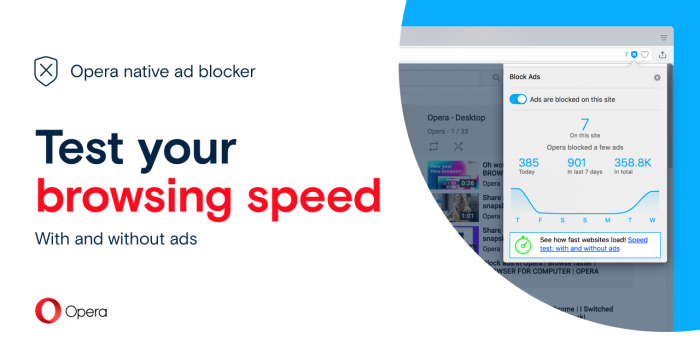 Opera also comes with a feature which allows users to benchmark the loading speed of websites with and without ad blocking. We introduced this tool in order to raise awareness about the impact ads have on the browsing experience.

The real difference between the Opera and Chrome ad blockers, however, becomes apparent when we take a closer look at the actual speed impact for users:

The results show that Chrome’s ad blocker does not address the key issue of delivering a faster browsing experience. In our testing, we didn’t observe any significant speed gain from the ad blocker in Chrome.

The reason for such results is that Chrome only blocks a very small fraction of ads that are used by only a fraction of the world’s websites. In a different study, Adblock Plus found that Chrome’s ad blocker only blocked nine out of the 55 types of ads currently used online.

Demand for ad-blockers will continue to increase

Since 2011, an average website has tripled in size, now taking up an average of 3MB. According to Speedcurve, website size is likely to increase to more than 4MB by 2019 and much of this is will be taken up by images, even more video content and style sheets. Moreover, the advertising industry still hasn’t delivered ad solutions that would be lighter and more acceptable for website visitors. 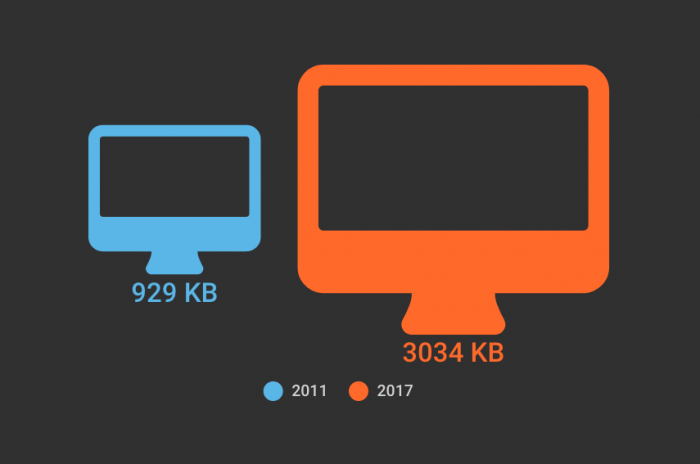 According to eMarketer, ad blocker usage is growing worldwide and is likely to exceed 30 percent in the US in 2018.  At Opera, we have experienced a steady rise in the percentage of users who decide to switch our ad blocker on. Even though only available as an opt-in feature in preferences, the usage of Opera’s  ad blocker also grew by 30 percent just between mid-August 2017 and February 2018.

Apart from the need for speed, we have noticed that an increasing number of people are using our ad blocker as a security tool. They simply dislike the idea of being constantly tracked by advertisers but also want to be protected against a particular threat which came to the spotlight during the past few months: cryptojacking.

According to a report by Check Point quoted by FastCompany, cryptojacking malware accounted for two of the three most widespread malware infections globally in December 2017.  Cryptojacking means that some third parties run scripts on your computer or phone to mine cryptocurrencies. The scripts use your devices’ CPU to earn the third party money without your consent while also draining the devices’ batteries and making them hot and slow. Opera became the first major browser maker to introduce cryptojacking protection in all our desktop and mobile products. So if you’re using our browsers, you are safe. 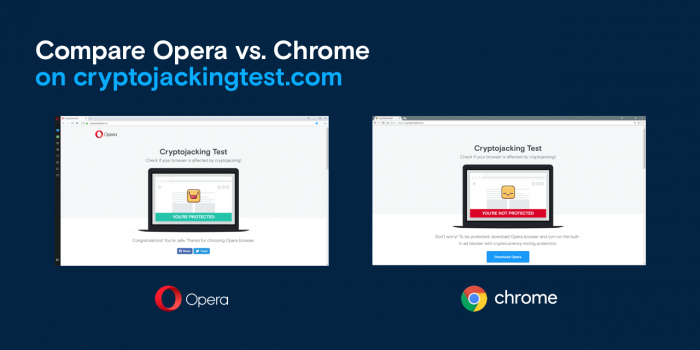 Just to make sure, you can run our cryptojacking test to check if your browser’s ad blocker also blocks cryptocurrency mining scripts.

We need new thinking for the future of ads

We believe Google’s introduction of an ad blocker based on IAB’s Better Ads Standard will for now have a relatively small impact on the web ecosystem. While it might prevent some websites from using the most intrusive types of ads, in its current version it doesn’t address any of the users’ real needs of faster browsing, less annoyance and more safety while surfing the web. It is therefore likely that the demand for real ad blockers will continue to grow. We thus predict that the quest for new ways of monetizing online content is likely to continue.

Hopefully, the industry will take this seriously and look for new models that both users and publishers will accept.

We tested Chrome 64.0.3282.167 (official, 64-bit) with ad blocker on, and Opera 51.0.2830.26 (stable) on Windows 10 OS build 16299.192. Each website was loaded 15 times and the loading time drawn from Navigation Timing. More details about this method can be found here. The 10 websites used in the test were cnn.com, forbes.com, foxnews.com, huffingtonpost.com, indiatimes.com, news.yahoo.com, nytimes.com, reddit.com,  theguardian.com and washingtonpost.com. The tests were conducted repeatedly on February 19th.