The Opera team is headed off to the Mobile World Congress (MWC) 2015 in Barcelona!

So, what’s MWC? It’s is a yearly exhibition held in Barcelona where top-notch devices are launched, trends are revealed and meaningful discussion happen for the mobile tech industry. This year, there will be 1,900 exhibitors from around the world!

We asked four of our Opera colleagues to describe MWC:

How has MWC influenced your work?

Mid-week, at a bar in Barcelona, I realized I was sitting between someone who helped create Facebook Zero and someone who launched Wikipedia Zero. These were the leaders of zero-rated services, pioneering the idea of having operators offer free access to useful websites like Facebook and Wikipedia for users. Talking to them about zero rating and Opera Max inspired me to believe that it really is possible to create a next-gen zero-rating platform that will help us connect the unconnected. What was the most interesting feedback you’ve had from other attendees?

When we launched Opera Max, other app developers visited our booth and told us that the data-savings and user-experience enhancement from Opera Max would definitely help their users to access Flipboard more often. Since we’d just launched the product, it was very exciting to get such positive feedback, especially from other app developers! If you have a chance to visit MWC, please find me at Hall 5/Stand no. 5C21 and let me know you have read this blog post. You will get a small gift from me 🙂 Which mobile-tech innovation showcased at MWC do you remember the most?

It’s intriguing to see the technological leaps at the MWC. Having a technical background in telecommunication I’ve been particularly impressed by the innovations in radio technology. Densely populated cities have always faced a tremendous challenge in providing a stable and fast connection for all. However in the past years, network technology has gone through a silent revolution in using the radio spectrum more efficiently than ever. Tell our readers a bit about Barcelona! It’s your hometown, so you’re the expert .

It’s a gorgeous and charming city, with lots of history, impressive architecture and delicious food. Oh, and it’s on the seaside, which makes it even more special! One of my favorite restaurants is Rita Rouge – the food and cocktails are great, and I love the atmosphere! 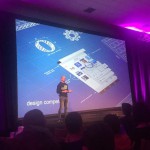 Opera’s Engineering team meets up on the French Riviera 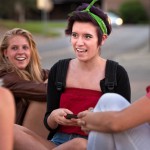 Is mobile technology making the world a better place?