25 years ago, the concept of the World Wide Web was proposed by Sir Tim Berners-Lee at CERN. The Web has played a vital role in bringing people closer together, for people to collaborate, communicate and innovate faster than ever before.

Never before did we have so much information readily available as now. People can talk to their colleagues, friends or family through video conferencing. Being lost in a city is a thing of the past thanks to online maps. We can reconnect with old friends, share pictures, videos and thoughts about our lives with incredible ease thanks to social networking. The Web has even played a role in major revolutions all across the world. I humbly submit that Opera as a company would not exist if it were not for the Web.

At the same time, being of the major web browsers of the world, Opera has been making the Web better and will always be committed to it. We’ve been one of the most vocal proponents of open web standards and work with various standards bodies like the World Wide Web Consortium (W3C) to further strengthen the Web everyday. Opera has also been the leading company to bring the web to many different devices, much before it was mainstream. We saw the potential of of the Web on mobile as far back as 2004, when we created Opera Mini (which was then a pilot project) – which now connects hundreds of millions of people to the Web everyday, quite some of whom who would not able to use the Web by any other means.

Opera, through it’s various products, has also taken the Web to TVs, set-top boxes, blu-ray players, portable gaming consoles, and many more devices. We’re constantly looking to push the Web as a platform and to bring it to as many people as possible. Our commitment to internet.org further strengthens our resolve to bring the Web to everyone.

I think it’s safe to say that the Web has been one of the greatest forces of change and good in the history of humanity – and it’s only been 25 years. To everyone who has ever been online – Thank you for playing your own unique part in this amazing story called the World Wide Web. Let’s imagine what it will be in the next 25, and beyond!

Gallery image with caption: Here comes the Greater Wall for all Opera fans! 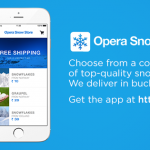