Today marks the first release of Opera Developer 22. For this initial developer release our primary focus has been on backend changes to ready ourselves for future improvements in the UI and elsewhere.

Nonetheless, 22 is a major update and includes hundreds of bug fixes, crash fixes and site rendering improvements (see our changelog for the full list).

In addition some UI improvements are already visible, such as a new Encoding Menu, an update to our default themes and a better (silent) update process on Windows. Our new silent update allows for a more seamless update to the latest version. There are no buttons to click and no UAC (User Account Control) dialog interrupting your workflow. You will be automatically updated to ensure you always have the most recent and most secure Opera version.

Note: This build will not silently update, that will happen from the next Developer release.

Thanks again for your testing and feedback, which is (as always) greatly appreciated! 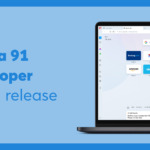