Let’s face it, we’ve all had to deal with the horror of dodgy internet or the pain of patchy WiFi at one time or another and the acute boredom that follows.

But losing your online connection doesn’t mean that the fun has to stop. Which is why we recently challenged artists and game creators from across the cosmos, to design the most awesome UFO themed in-browser offline game for Opera GX (the only browser designed specifically for gamers).

Our quest is finally over, and we are thrilled to be able to introduce Operius – the first in-browser offline game to feature in Opera GX. Now, whenever you are faced with the dreaded “No Internet Page” when GX cannot connect to the internet, Operius will be there to entertain you!

Designed by talented indie creator, Mors, Operius is set in a dark future when all of the world’s computers have simultaneously lost their connection to the internet. Suspicion quickly turns to a large unidentified flying object first sighted around the time of the outage. The only way to save the planet’s internet is to fly into the UFO and destroy it from the inside. But first, players must blast and dodge their way through hordes of alien invaders, as they progress sector by sector in their quest for glory.

While certain offline dinosaur games seem prehistoric and surfing games feel washed, Operius features razor-sharp, retro-inspired vector graphics which pay homage to the great space-based arcade shooters of the eighties. While the pulsating high-adrenaline soundtrack, written by Catonator, means there’s no doubt that Operius is a game designed for gamers (and not for people doing their online grocery shopping or internet banking). Being offline doesn’t mean you can’t play together: just share your keyboard with a friend and enter the two player mode. Sorry dinos – you and your single player mode have just become extinct!

When we launched the Opera GX Game Jam with GameMaker Studio 2 back in the summer, we were amazed to receive over 900 entries from indie game creators eager to entertain those  inflicted by the boredom of unexpected internet outages.

Once our expert jury had agreed on the best entries, the top eight games were put forward to the public vote, with Operius emerging victorious with a huge share of the votes.

The two runners-up were OH NO! Aliens Stole my WiFi by EE Wick in 2nd place and Nettie and Settie Save the Internet by Joyhop in 3rd place. In a few weeks, they will become available on GXC,Opera’s upcoming self-publishing platform that will allow indie game makers to publish their GameMaker Studio creations directly to the platform and for free – for other users to enjoy and give instant feedback

And what happens after the internet returns? You’ll probably still want to give Operius another go. You can put your skills to the test and train for your next internet outage by typing  opera://operius in Opera GX’s address bar.

P.S. Trouble finding Operius in your Opera GX? Make sure you’ve got it updated to the newest version. There are 3 ways to do it:

1: Go to opera:about in the GX address bar

Opera GX adds a splash of color with CORSAIR iCUE 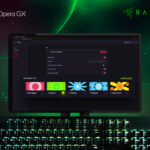 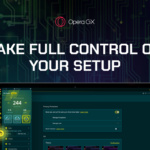